Laser now rules the waves around the world in over 50 countries. During that time LaserPerformance has been there supplying the most sought-after Lasers and supporting the growth of the Laser sailing community around the world.
“There have been more than 200,000 Lasers built around the world, the biggest number of any boat ever. They are sailed at Olympic, Nationals, in Men, Women, Juniors and Masters levels and of course as a fun boat.” 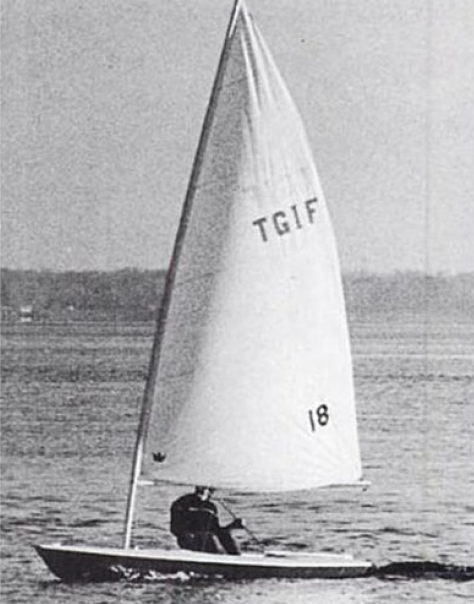 The new Weekender (name of the first prototype), with “TGIF” (Thank God It’s Friday) on the sail, won the America’s Teacup regatta in Wisconsin.

The boat was named “Laser” in November 1970 and production started the same year. The Laser was launched at the New York Boat Show. Their uniform design and affordable price attracted sailors and 144 Lasers were sold. Laser sails were identical due to modern laser cutting thus setting a standard for future racing classes.

The name “Laser” was chosen as being modern, recognisable and truly international and that the symmetrical Laser beam logo would only have to go on one side of the sail.

In 1972 LaserPerformance launched its manufacturing facilities in Banbury, UK, producing One Design Laser boats that became the quality standard for racers.
1982
Bankruptcy of Les Voiliers Performance Inc/ Performance Sailcraft Inc of Canada, the owner of the Laser trademark
Peat Marwick Limited acting as receiver of the company sold the trademarks to different parties around the world thus breaking up the trademark rights
LaserPerformance acquired the rights to the trademarks in various countries
GROWING THE FAN BASE
… through innovation
1988 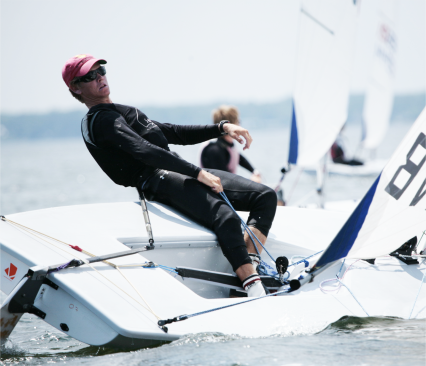 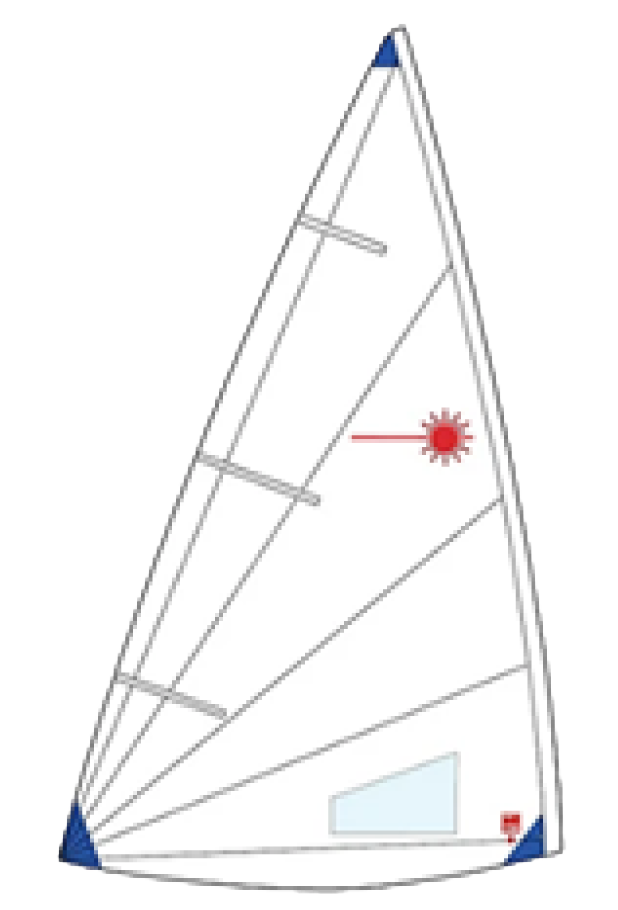 In the 1980s the smaller Laser Radial rig was designed by LaserPerformance allowing smaller sailors to sail with less effort. The Laser Radial quickly became popular amongst women sailors and others around the world.

Following the success of the Radial, LaserPerformance developed the Laser 4.7 rig in the UK in 1989 with an aim of allowing youth sailors to enjoy the Laser 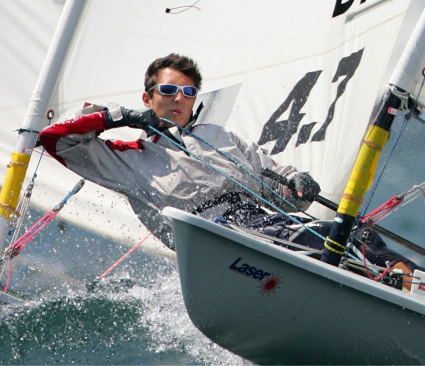 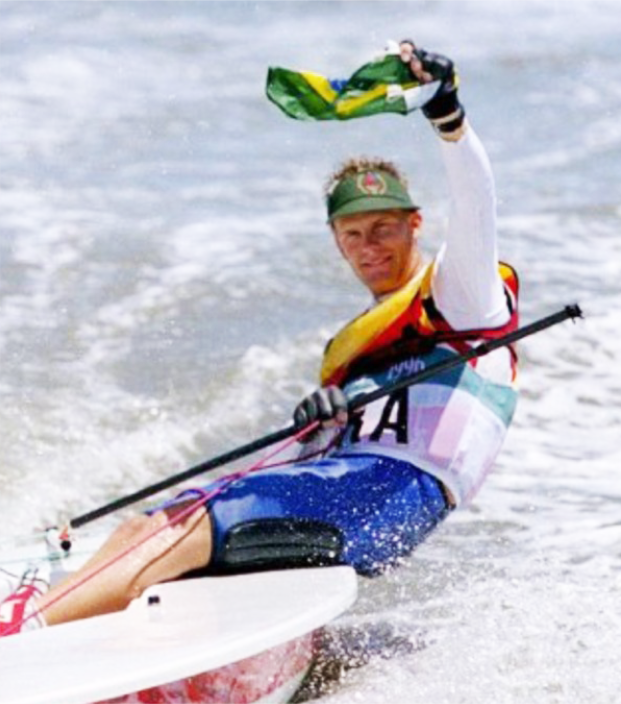 Atlanta 1996 © IOC Media
With a hull that could take 3 types of rigs, the Laser quickly became suitable for the whole family and in the 1990’s its popularity rapidly spread across Europe, Asia and the rest of the world.

LaserPerformance steered the path to the Olympics winning entry for the 1996 Olympics in Atlanta.

The Laser was introduced to the Olympics as an open class for the 1996 Quadrennial. The simple single-person dinghy already had a cult following of thousands all over the world and inclusion in the Olympics was viewed as a forgone conclusion.

The first ever Olympic medal in the Laser was won by Brazil's Robert Scheidt at the Atlanta 1996 Games after a dramatic start line duel with British rival Ben Ainslie. 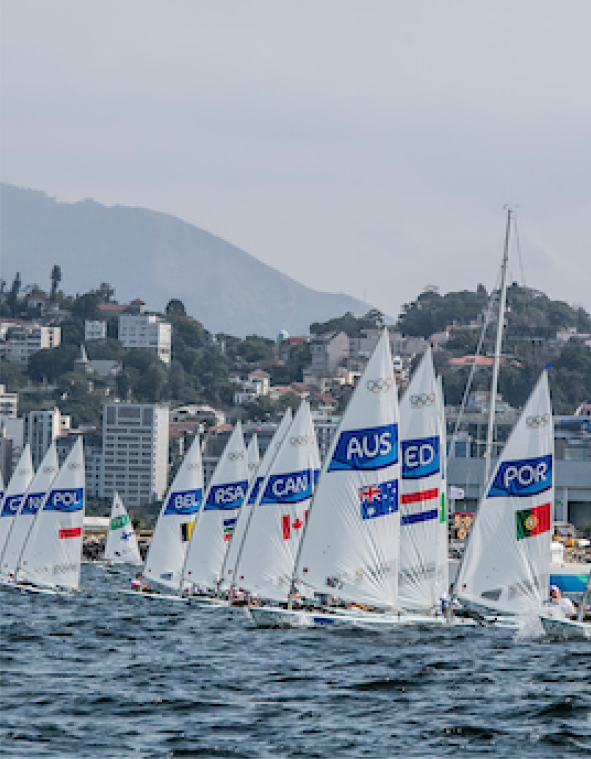 Xu Lijia is the first Chinese sailor to receive a bronze medal in women's Laser Radial class at the 2008 Summer Olympics in Beijing and a gold medal in the same event at the 2012 Summer Olympics in London. Her win led to a surge in popularity in the sport of sailing in China.

46 countries participated in Laser competition at the 2016 Olympics in Rio, reaffirming the Laser’s global popularity.

The Laser's low cost and ease of transportation means it has the widest pool of nations competing of any Olympic Sailing Class and it's not unusual to see sailors from nations that aren't traditionally viewed as big sailing nations on the podium. 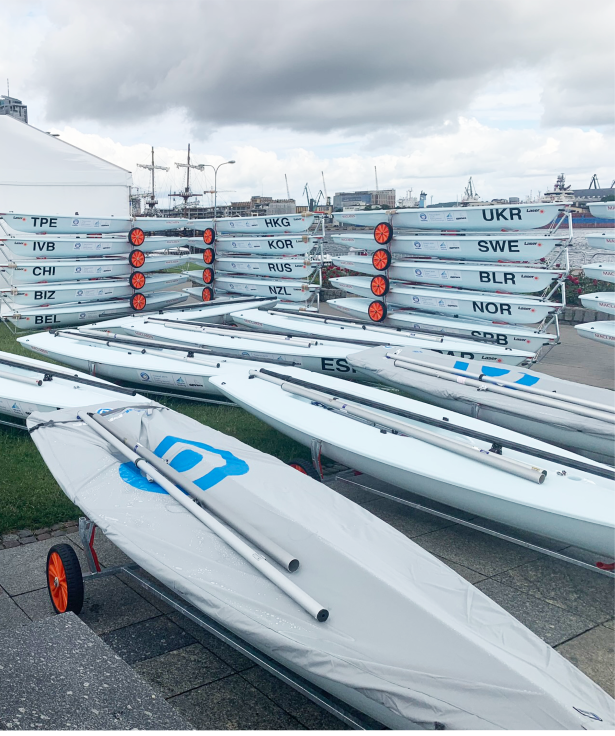 Ever since the introduction of the Laser in the Olympics in 1996, LaserPerformance has partnered with World Sailing to promote Laser sailing around the world and has been the primary sponsor of Laser World racing events by supplying boats to event as well as being the Official Supplier of Laser boats for the Olympics (1996, 2004, 2008, 2012, 2016)

GROWING THE FAN BASE
…through investment in manufacturing capacity and quality

LaserPerformance streamlined its UK manufacturing by adding capacity for production of Laser boats and thus doubled the Laser boat market and production from the UK facility to 1,400 boats a year

LaserPerformance steered the path to the Olympics winning entry for the 1996 Olympics in Atlanta.

LaserPerformance acquired the US builder Vanguard Sailboats and consolidated trademark rights in the group territories whilst streamlining its US manufacturing by adding capacity for production of Laser boats and thus doubled the Laser boat market and production from the USA facility to 1,100 boats a year.

GROWING THE FAN BASE
…through supporting and promoting participation
2010 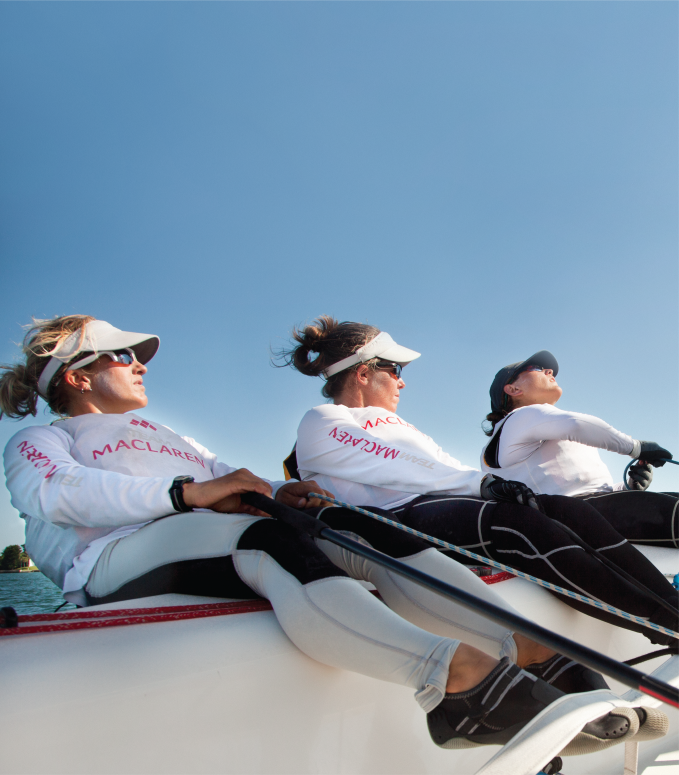 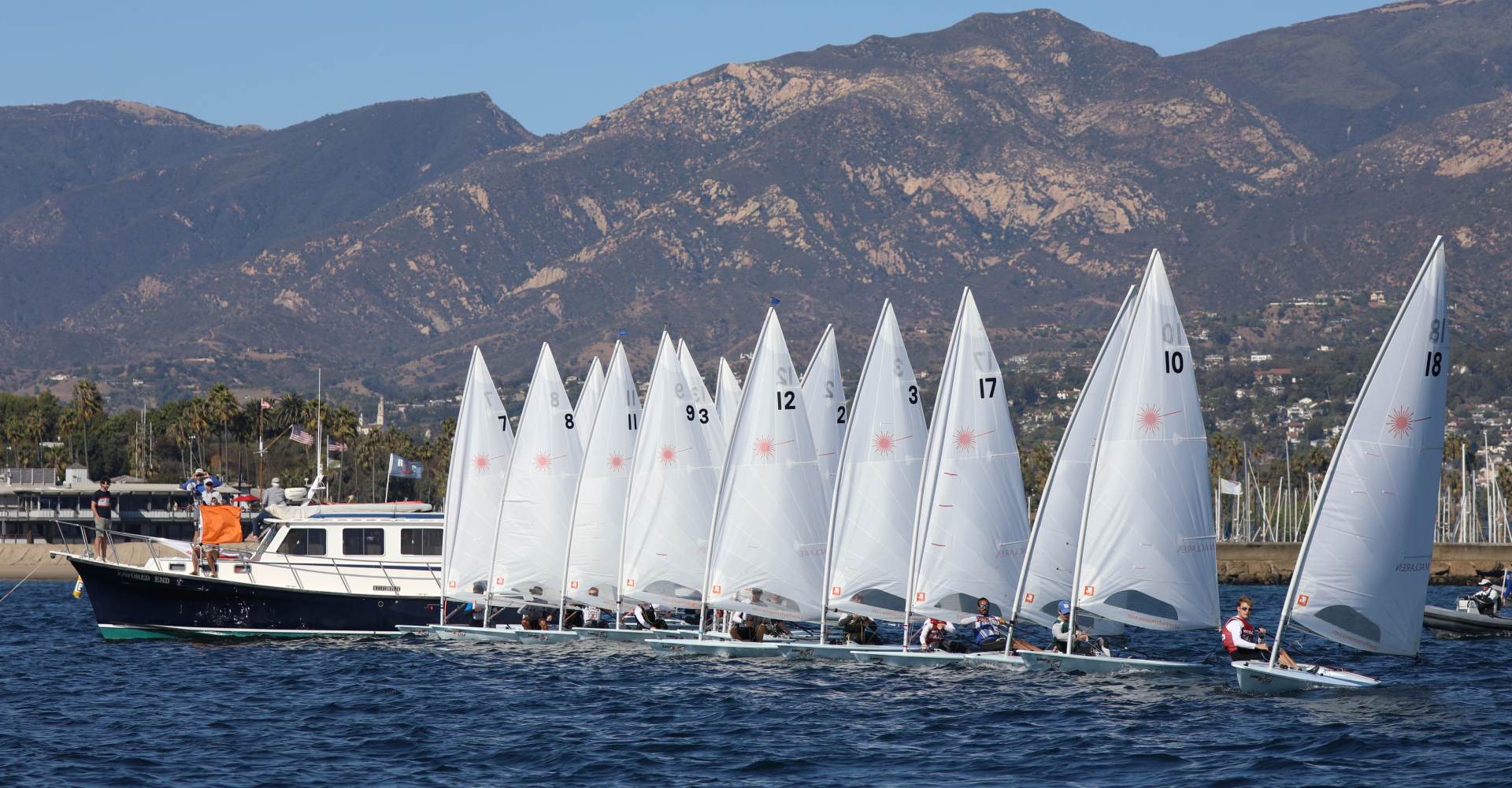 GROWING THE FAN BASE
…through supporting and promoting participation
2009 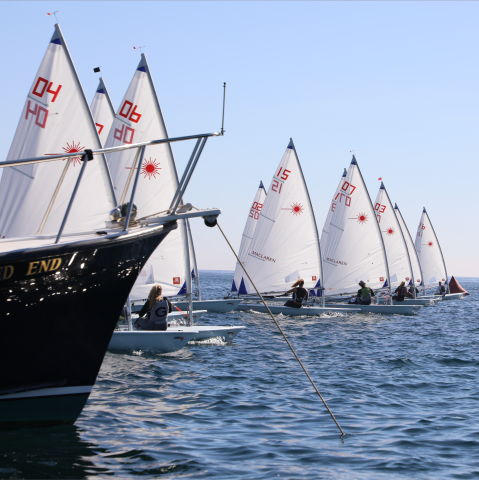 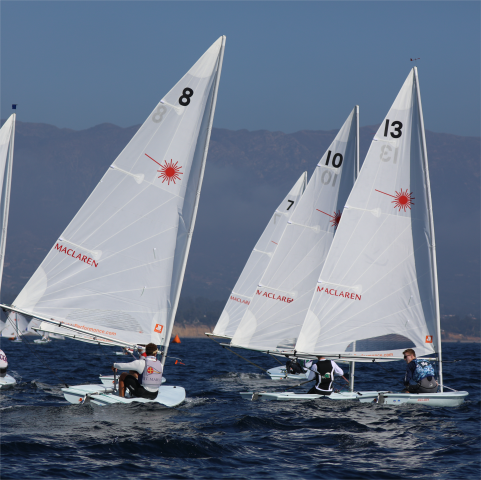 SINCE 2021 LASERS ARE BUILT AT
LASERPERFORMANCE LDA IN SETÚBAL, PORTUGAL
2021 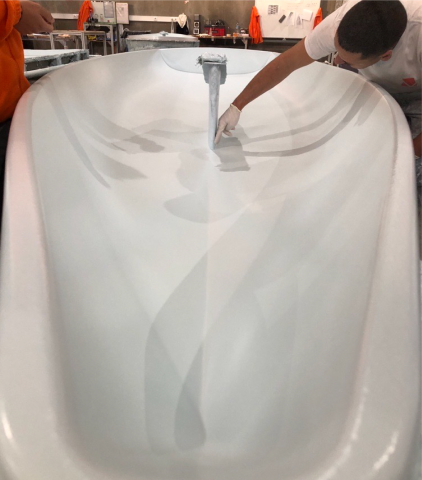 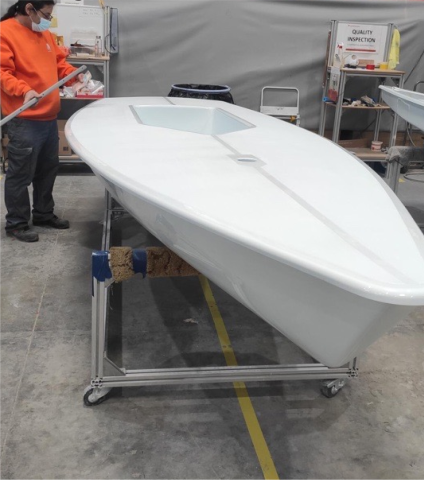